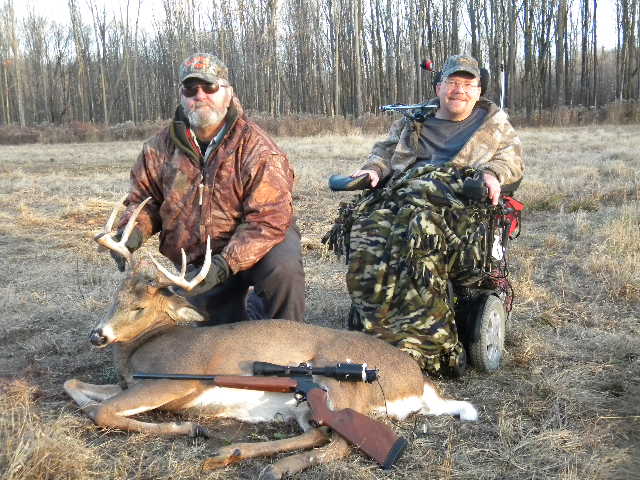 “It sounds like the beginning of a joke,” says Don Christensen, of Spooner, . “A quadriplegic and a blind guy go deer hunting…”
These two, however, dropped the punch line on an eight-point buck.
Here’s their story: 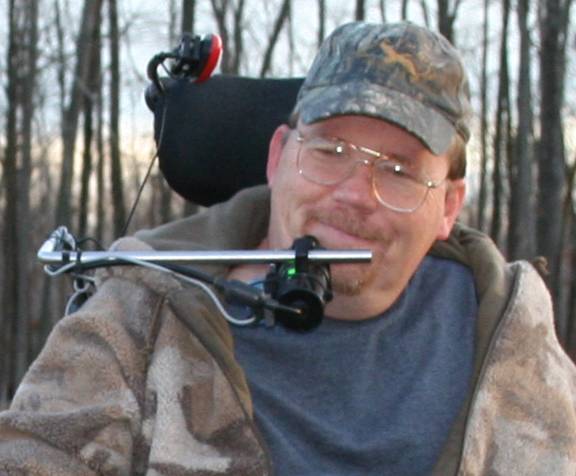 Diagnosed with multiple sclerosis (MS) in the late 1990’s, Don—who has lost the use of his arms and legs—never let the debilitating disease dampen his enthusiasm for hunting. He created a website,
http://afarcry.info/, to help people with disabilities access the outdoors.
“When my buddy Ralph Barten suggested that we harvest a deer together, I was intrigued but I knew it wouldn’t be a simple task,” Don says. “Ralph said he’d be my arms if I’d be his eyes.” 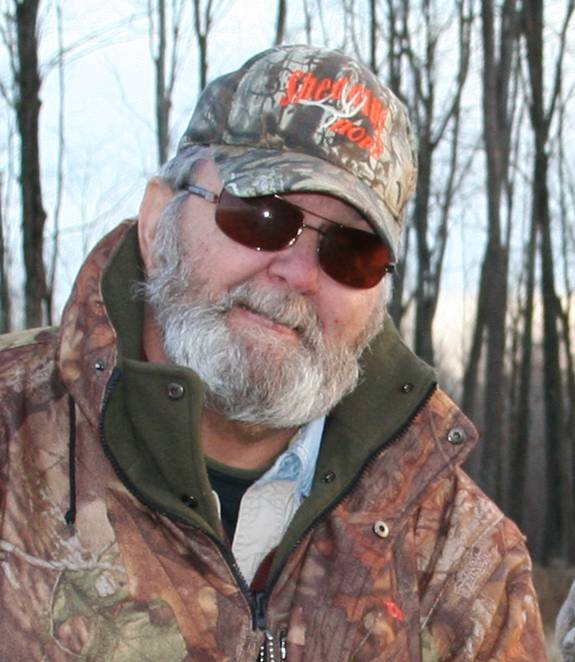 Ralph, who hails from , is completely blind. He has enjoyed many successful hunts with the help of a “spotter” (someone looking over his shoulder to advise him where to aim).
“Since I’m in a wheelchair, the only way for me to see over Ralph’s shoulder would be to have him sit on my lap, and that was NOT gonna happen!” Don says with a laugh.
“That’s where my son Riley came on board,” Don says. “We borrowed an iScope, which is a bracket designed to hold a smartphone up to the back of a riflescope.”
The iScope works well with a smartphone in good light to take video through the scope. “Unfortunately, we were going to be sitting in a dark shooting house and the phone couldn’t gather enough light for a viewable picture,” Don explains. “Riley found a way to attach a small webcam to the bracket and hooked it up to his laptop. Ralph came to visit and we shot some paper targets to make sure we were ready.”
On the evening of Friday, October 19, Ralph, Don and Riley arrived at Hogsback Ranch, a hunting preserve in central . They met the owner, Nathan Wininger, along with Roger Devenport and Cam Tribolet from The Way Outfitters, who had helped arrange the hunt.
They spent Saturday morning devising a game plan and recording interviews for Outdoor Bound TV. That afternoon they faced a looming challenge before the hunt even began: Don’s motorized wheelchair lacked sufficient torque to climb the steep ramp to the stand, which sat six feet off the ground. 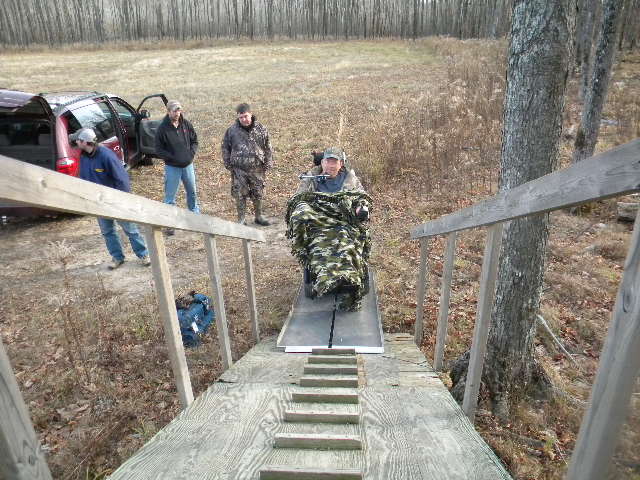 Somehow the crew muscled Don and his 300-pound chair up the incline.

Returning to earth was a bit easier. The team figured a way to tie safety ropes to the chair and “rappel” it down the ramp. But before that…
A fine buck entered the food plot an hour after the hunters and their helpers had settled into the stand. “It was early, so we decided to wait,” Don says. “About 45 minutes later we saw one of the ranch’s dream bucks, one that would score almost 250 inches. I don’t know how long we watched him but it sure made the evening go by quickly.”
Shortly before nightfall another shooter buck presented an opportunity. Riley’s invention worked perfectly as Don instructed Ralph where to aim and when to squeeze the trigger. After the shot, the deer ran 100 yards across the food plot and into the woods. “We felt nervous because he looked just fine. A couple guys slipped down to find the trail, but an hour of searching turned up no blood or hair,” Don says. “The next morning we returned and found absolutely nothing, so it was off to the range to see what was going on with Ralph’s scope. A couple shots proved why that buck was untouched. Somehow the scope had gotten knocked out of alignment because it was shooting 6 inches high and 6 inches right!”

This video shows the moments leading up to the errant shot:

On Sunday afternoon the hopeful hunters were back on stand. They saw a monster buck but didn’t have the green light for one that size. “It was a treat just to watch him,” Don says. “A shooter buck appeared during the last minutes of daylight. That would’ve been okay but the laptop I was viewing was almost out of battery life. We took a hurried shot before dark but didn’t connect.”
The weekend hunt was over, but Nathan invited Ralph and Don to return. Don says he knew they had some bugs to work out before giving it another shot. “Riley and a friend of mine fine-tuned the camera setup, and Ralph and I smoothed out our communication. We put the camera on my TC Encore and made sure the 7mm-08 was shooting hairsplitting groups. Almost before I knew it, we were on the road again to give it one more try.”
On Friday, November 2, Ralph, Don and Riley were in the shooting house with Nathan and Bob (cameraman for Outdoor Bound TV). “It was a beautiful afternoon for November and by the time Riley had all our equipment in place, the first doe stepped onto the food plot,” Don says. “The rut was beginning to heat up and it wasn’t long before a buck chased her off into the woods. A short time later, a shooter buck appeared right next to the stand. He worked his way in front of us, but at just 45 yards, he was almost too close for Ralph and me to communicate.”
Ralph already had the rifle on a sandbag and pointed out the window, so Don whispered directions like “up a lot” and “a little to the right” to put the crosshairs on the buck’s shoulder. Every time the deer moved, they had to start the process all over. Then Don coached Ralph to cock the hammer, take a deep breath and let half of it out. After some final aiming adjustments, Don said, “Squeeze.”

Here’s what Don saw as he helped Ralph aim:

Ralph asked excitedly, “Did we get him? Did we get him?”
It was a perfect double-lung shot. The buck ran 15 feet and collapsed.
“We did it, buddy!” Don blurted. 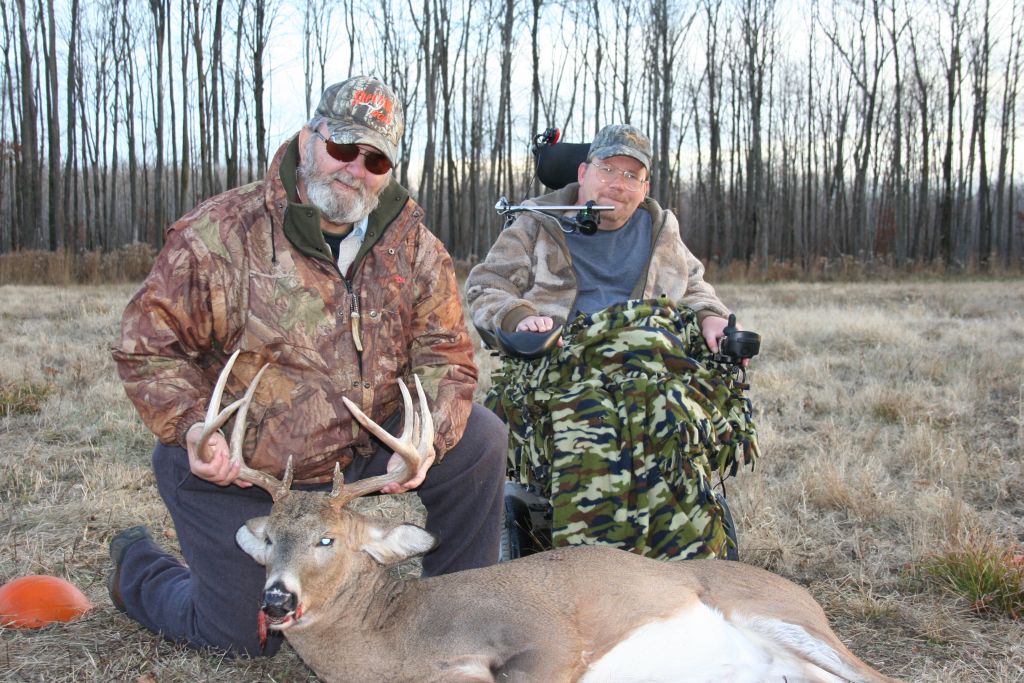 “Our success shows that when good people tackle a challenge together, anything is possible,” Don says.
Postado por Andy Hahn às 4:10 PM