Do stories about Christmas ghosts scare the Dickens out of you?
Fear not, these yuletide tales focus on fond memories of jolly spirits and Christmas hunts in .
Here are a few holiday memories:
JASON’S FIRST DEER
In 2007 Ligia (my wife) and I began our tradition of holiday hunts at Bang’s Paradise Valley Hunting Club in . We arrived on Christmas Day and spent the last week of the SC deer season in camp, enjoying the family atmosphere.
The highlight of that trip occurred one evening as I sat in a two-man tree stand with my nephew Jason (then 16 years old), who was on his first-ever hunt. In the last moments of daylight I saw two deer enter a clearing 50 yards to our left—perfect, because Jason sat on that side of the blind.
I nudged Jason, and when he saw the deer, he carefully placed his .270 on the shooting rail. “Which one?” he asked.
Both were full-grown does, so I whispered, “Either one.”
The deer were just shadowy forms in the fading gloam, but I knew the scope’s 52 mm objective would give Jason a clear view of his target. Even so, we had no time to lose. One deer turned perfectly broadside. “Should I shoot?” he asked.
“Take your time,” I said. “Aim carefully and squeeze the trigger.”
The kid hesitated. The deer took a step forward. I tried to stay calm, but inside my head I screamed “Shoot! Shoot! Shoot!”
A few more long seconds, and then the rifle roared. One deer ran away while the other stood still. Before Jason could rack the bolt, the 100-pound doe wobbled and collapsed. A perfect lung shot!
“Are you OK Uncle Andy?” Jason asked. “When I was aiming I could hear you breathing kinda fast.”

RUDOLPH’S DEMISE
The following year we arrived at for our holiday hunt on December 22.
The lodge owner, Bang Collins, had a cake ready for Ligia’s birthday (Dec. 23). 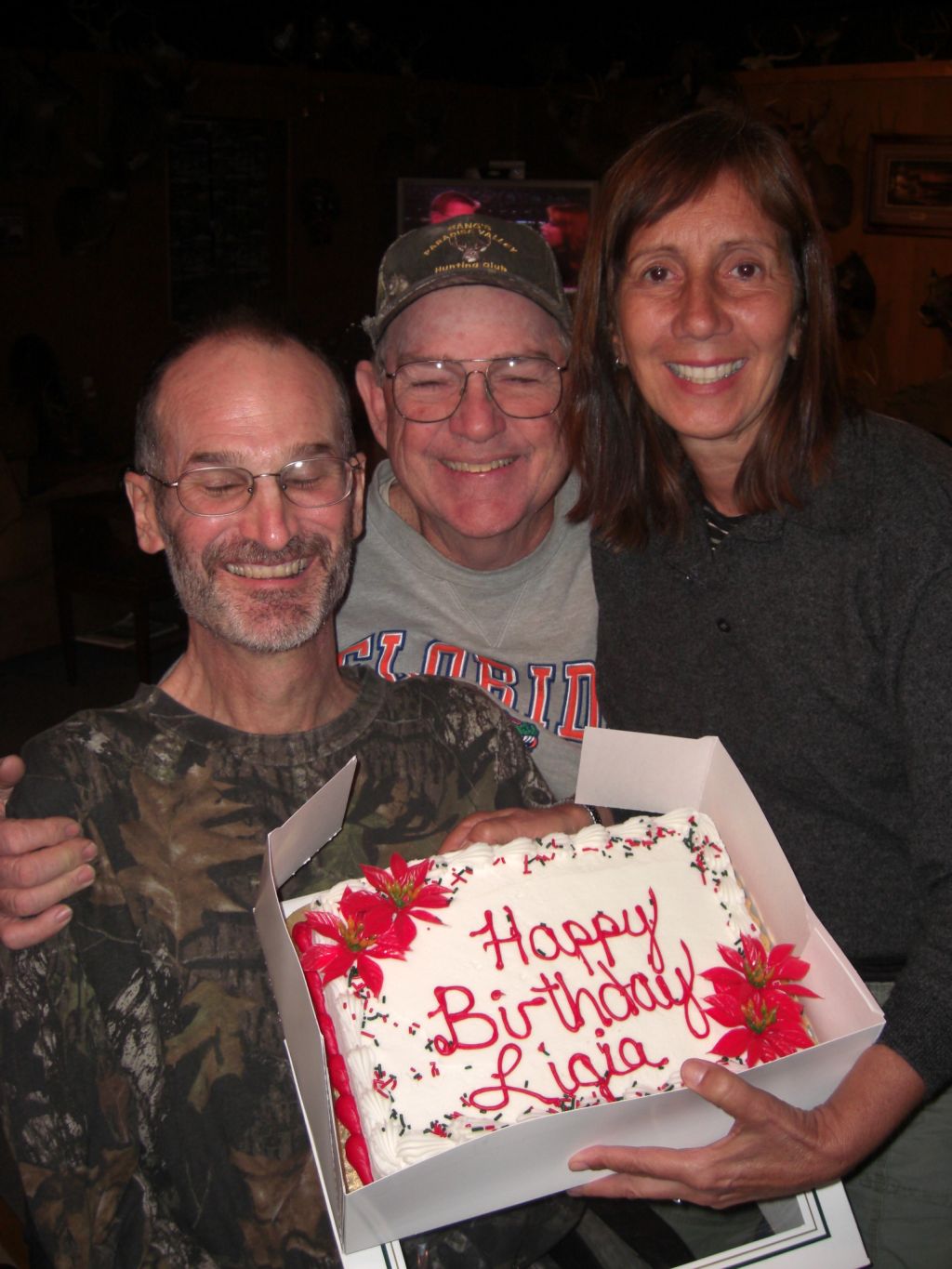 As my friend Ron and I were heading out to hunt that afternoon, Ligia said, “Bring back some venison for my birthday.”
We saw only one deer that evening. On any other day we would have let the button buck walk, but I reminded Ron of Ligia’s birthday wish. My wife was all smiles, visions of venison jerky dancing in her head, when we returned to camp with a deer. Just when Bang was ready to snap our photo, Ron said, “Wait a minute!” and trotted into the lodge.
He emerged with a red Christmas-tree ornament and fastened it to the deer’s nose. “Rudolph flew a little too low tonight.”
“You rascals have a warped sense of humor,” Bang said. “I love it.” 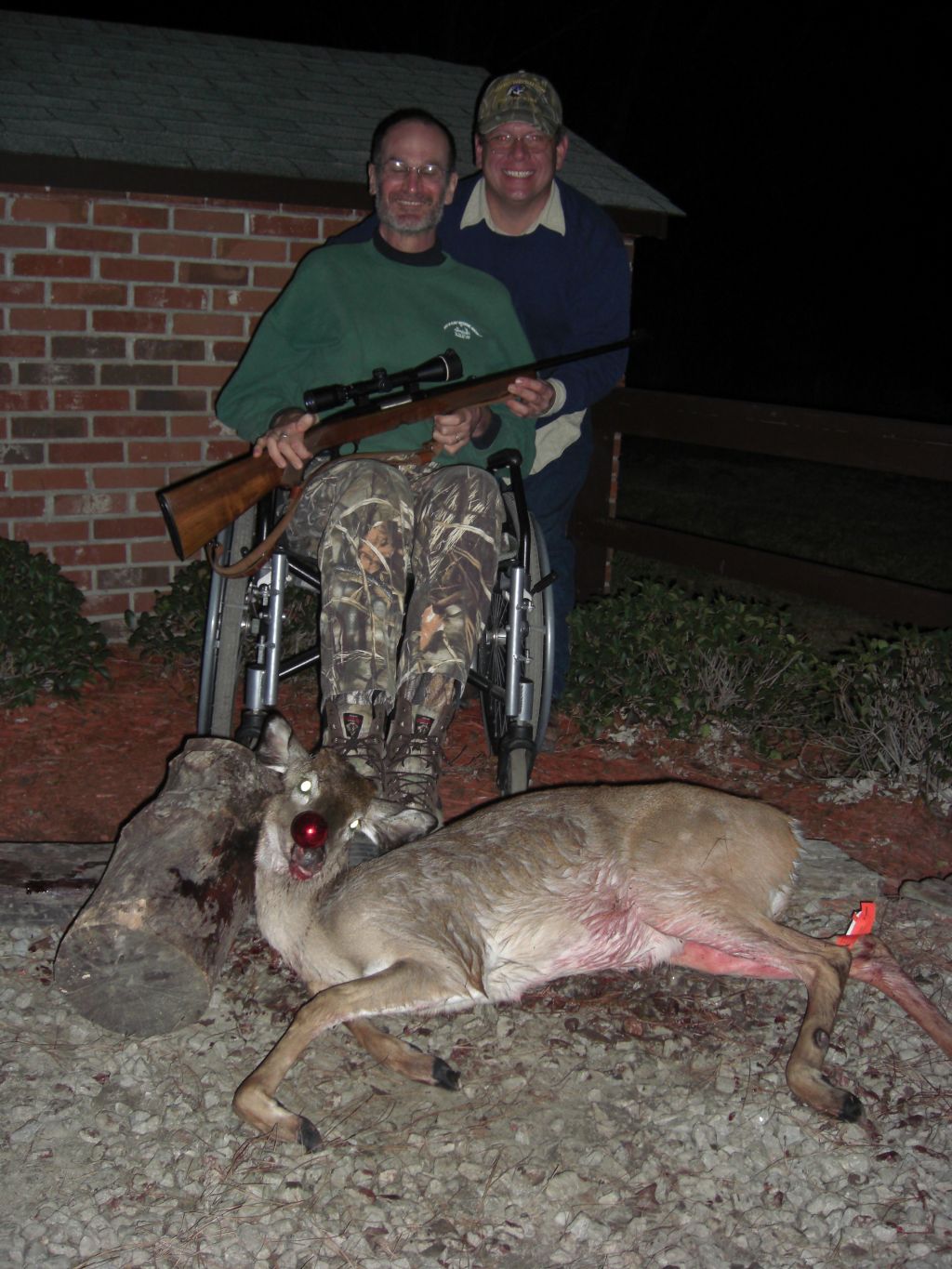 SQUIRREL SAFARI
Ron and I figured Santa wouldn’t bring us any gifts after we took out Rudolph, so we went squirrel hunting on Christmas morning. We got four bushytails, and had such a good time that we went again the next day.
Although we tallied 10 squirrels, my shooting setup hindered our effectiveness. The .22 was mounted on a BE-Adaptive LM100 gun support; Ron aimed while we both watched the sight picture on the scopecam, and I squeezed the trigger with a cable release. When hunting deer, Ron would take careful aim and say “Squeeze” or “Whenever you’re ready.”
But when my point man lined up the crosshairs on the first squirrel that morning he said, “Smoke’m!”
I started laughing, which made my wheelchair shake, which wiggled the gun support, which made the crosshairs dance, which made it impossible to shoot until I had regained composure. 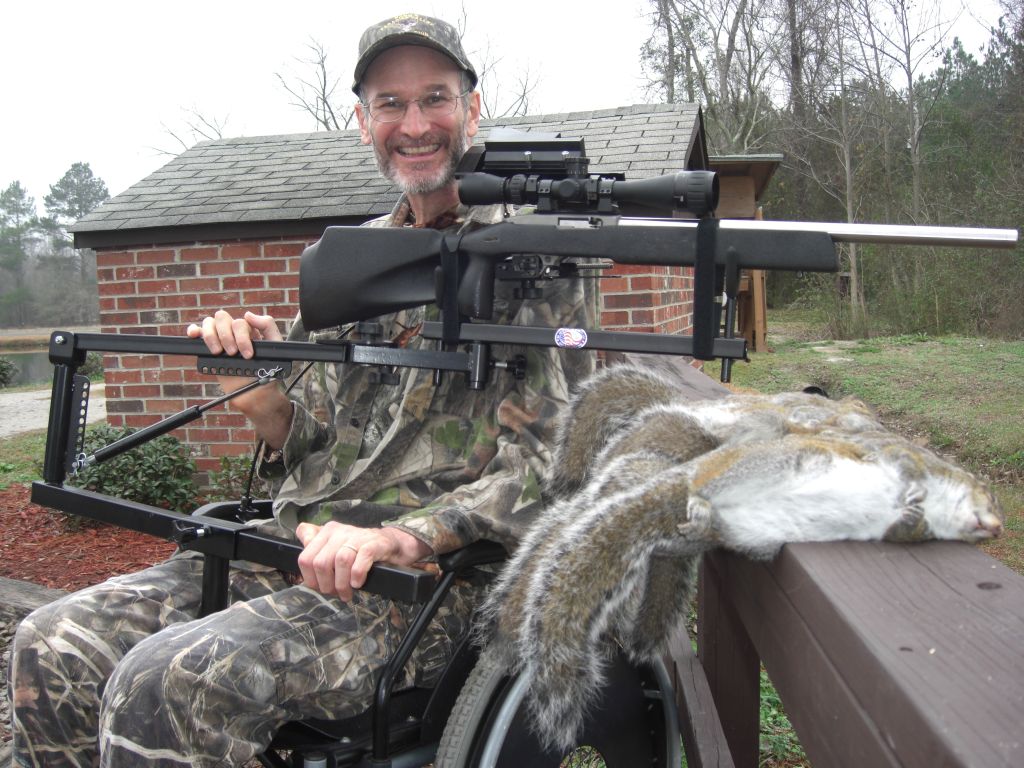 That evening as we talked about our “rodent-control project” I noticed a youngster listening with wide-eyed attention. Nine-year-old Klay Elixson had come to Paradise Valley with his grandfather Rick Hires, another regular visitor at the lodge with whom we’d become good friends. I asked Rick, and when he gave his permission I invited Klay to join Ron and me for a squirrel safari.
The next dawn found the three of us anxiously waiting for some squirrels to appear. We didn’t have to wait long. We used my shooting equipment, which kept everyone involved in the hunt. Ron aimed while Klay and I took turns using the cable control to squeeze the trigger. Klay displayed fine hunting skills by keeping still, spotting bushytails and patiently waiting for high-percentage shots. The scope camera proved an excellent teaching tool as we followed squirrels on the monitor and discussed why different situations and angles made for good or bad shot selections. Our apprentice soon earned the title of No-Playin’ Outa-the-Wayin’ Lead-Sprayin’ Squirrel-Slayin’ Machine.
Sharing our knowledge and watching a young hunter enjoy himself, Ron and I probably had more fun than Klay that morning. Time in the woods with an enthusiastic kid also showed me that despite having special needs, disabled hunters can and must take responsibility for helping pass on our outdoor heritage to the next generation. 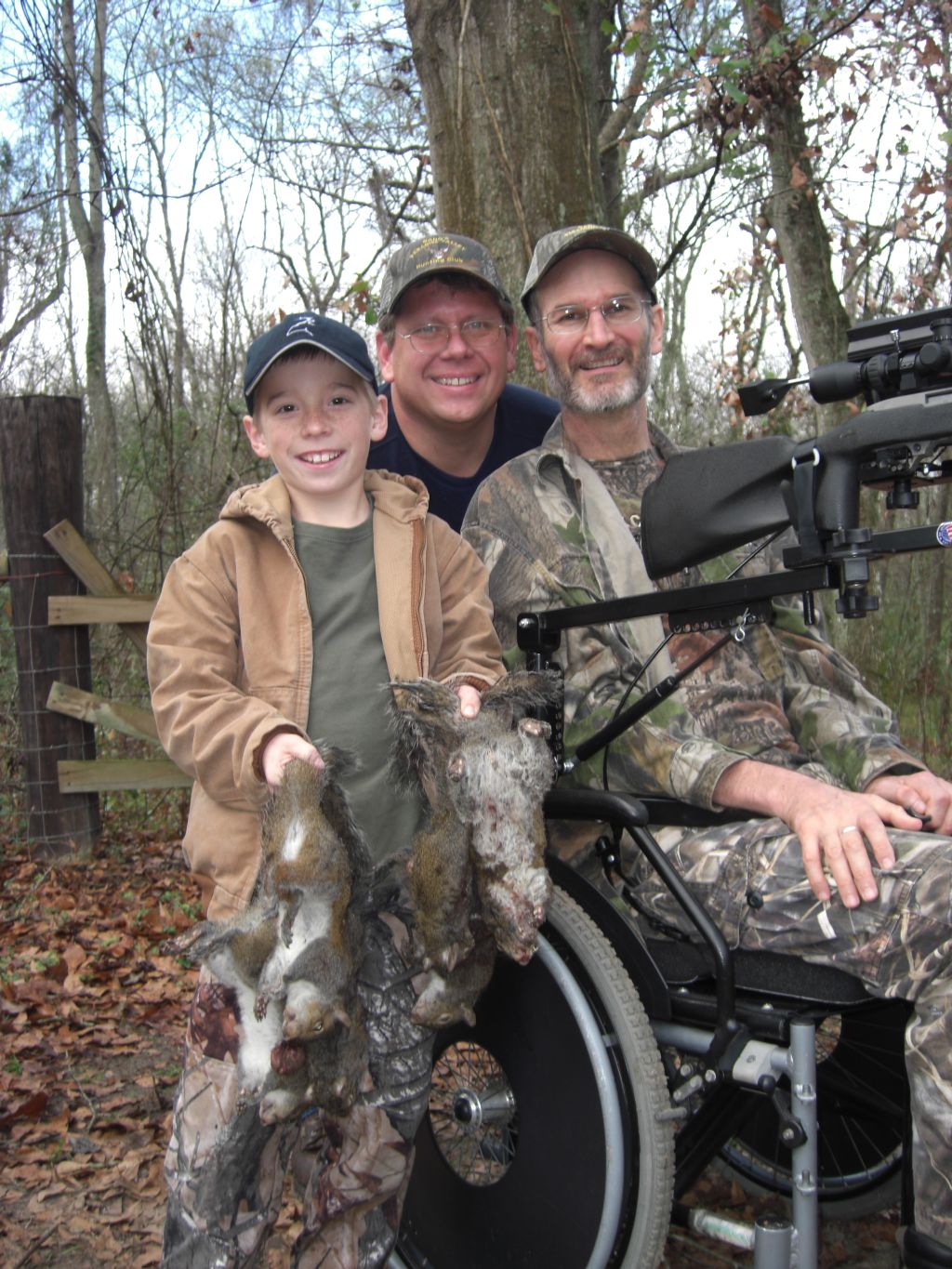