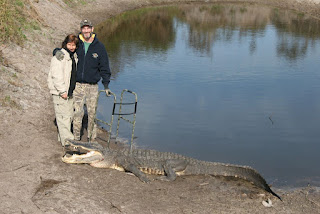 My job at Sport Fishing magazine required several trips each year to our headquarters in , and I wanted to squeeze in some hunting after one such trip in January 2007. Shooting oversized mice at nearby theme parks was a tempting but illegal idea, so I decided to go for an alligator.

game law allows for two basic methods of hunting alligators. The first requires entering a lottery for a nontransferable license. If drawn, the license holder must take a gator by snagging it with heavy fishing tackle and bringing it close enough to the boat to subdue with a harpoon; the coup de grace is usually delivered with a bang stick.
Since I lacked the strength, balance and agility to play tug-o-war with a thrashing, 10-foot reptile, I opted for the second method: Landowners can obtain Trapper Permits through the Private Lands Alligator Program and then delegate their gator quota to “agents.” Anybody can become an agent by purchasing an over-the-counter license for $52. With this license, snagging gators isn’t required. You can shoot ’em outright with a firearm.
I booked a hunt with Outwest Farms in Okeechobee, and Lee Lightsey, the owner, gave me the code I needed to provide when purchasing the agent’s license. Lee greeted Ligia and me when we arrived around 9 on the morning of our adventure. A cold front had just passed through and skies were clear. The thermometer marked 47 degrees—rather chilly by central standards!
“I have to take care of a few things before we head out,” Lee said. “But there’s no rush. If we give it time to warm up, the gators will get more active.”
At 10 o’clock Lee pulled up in a Kubota utility vehicle and told us to climb aboard. “A big gator has taken up residence in a pond on the other side of the ranch. Let’s go look for him,” he said.
When I booked the hunt, I had told Lee that I’d need to borrow a rifle. As we motored along one of the ranch’s service roads, I asked what I’d be shooting. “Nothing fancy,” he replied. “A Remington .243 with a Tasco scope. The target—an alligator’s brain—is as big around as a quarter, and the typical range is 50 yards. Can you make a shot like that?”
“Only one way to find out,” I said.
Lee stopped the Kubota at the edge of a small pond backdropped by a levee; behind this embankment ran a drainage canal from . We scanned the water for several minutes before Lee said, “There he is!”
About 70 yards in front of us, just eyes and nostrils appeared above the surface. Lee loaded the rifle while Ligia positioned herself to one side and behind us with the camera. “Aim right behind the eye,” Lee said, handing me the .243.
The scenario looked perfect. Facing to my left, the gator, seemingly unperturbed by our presence, gave me an ideal view of the target area. Lee steadied the shooting sticks, I held the crosshairs an inch behind the dark eye, and… the gator submerged before I could shoot.
“No problem. He’ll come back up sooner or later,” Lee assured me.
While we waited, Lee told me more about his hunting operation. He usually books from 20 to 40 hunts per year, and the price varies according to the harvested animal’s overall length. “Most of my hunters want a gator in the 9- to 12-foot range. The average size taken is about 10 1/2 feet,” he explained. “I stay in touch with ranch managers and workers who always keep their eyes open for alligators, so when I have a hunter we know where to begin looking for one of a particular size.”
Lee conducts hunts on his ranch and several others in the area. Proximity to and its canal system guarantees an ample supply of the aquatic reptiles. The Florida Fish and Wildlife Conservation Commission determines annual harvest quotas based on alligator populations in each area. “On one ranch I can harvest more than 100 gators per year, on some others only 12,” Lee said.
There’s no closed season on private property, but when is the best time to schedule a hunt? Spring is breeding season, which can be a disadvantage because gators stay on the move while looking for mates. In summer they settle down and become more stationary. Since summer usually has less rain, gators concentrate in smaller bodies of water, which makes them easier to hunt. Gators travel much less in winter, which facilitates hunting, but cold fronts can push them under water for long periods and make them harder to locate. Lee named September as the best month for hunting because of ideal water levels and stay-at-home gators.
“Look!” I said, pointing to a bubbly disturbance in the water.
“That happens when a gator moves around on the bottom,” Lee said calmly.
Fifteen minutes later, the lizard resurfaced. Now it was just 60 yards away and facing to my right, giving me another excellent shooting scenario. My legs began shaking as I leaned forward to aim (see the previous post about my bear hunt), but I managed to draw a bead and squeeze the trigger. Perfect shot!
The gator began turning lazy barrel rolls on the surface. Lee reached under the seat, produced a grappling hook attached to a rope, and hustled toward the alligator. “Gotta snag him before he sinks,” he said.
Once he hooked the gator, Lee dragged it along the shoreline and muscled it out of the water near the Kubota. Never trust a dead gator because the primitive nervous system sometimes functions without signals from the brain. While pulling the beast ashore, Lee clamped his hands around its snout to keep the jaws from opening. Then he planted a boot on its nose and kept it there while he severed the spinal cord by inserting a knife at the base of the skull.
After waiting five minutes to be sure the gator was indeed permanently immobilized, Lee propped its mouth open and allowed us to get close for photos. Although my gator was thin (Lee said it looked quite old and past its prime), the brute measured nearly 12 feet long.
COOL FACT: The word alligator is the anglicized version of el lagarto (“the lizard”), which is what Spanish explorers called the large reptiles they encountered in .
ENJOY THE SLIDE SHOW!