EVOLUTION OF MY SHOOTING SETUP
(PART 3 of 4)
BACK TO STICKS
Dealing with ALS has taught me the true meaning of “adaptive shooting gear” because I’ve had to keep adapting my strategies and equipment to stay in the hunt as the disease progressively eroded my strength and mobility.
Here’s how (and why) Ron and I made my setup more agile:

While I keep ad-libbing my way through the battle with upper motor neuron disease, ALS insists on following a script that calls for progressive loss of muscle strength. As my hands grew weaker I found it increasingly difficult to hold the BT-100 trigger control’s small paddles, which are really designed to fit in the shooter’s mouth.
In May 2009 I asked my hunting buddy Ron Wagner (who has all kinds of neat tools and, better yet, knows how to use them) if he could weld extensions on the paddles to create longer, easy-to-grip handles. Ron had a better idea. He called Brian at BE-Adaptive (maker of the BT-100) to explain what we needed and discuss possible solutions. One month later, BE-Adaptive sent me a custom trigger release featuring long, plier-like handles and a 3-foot cable that would give my point man more maneuvering room with the rifle.
My long-handled trigger release. 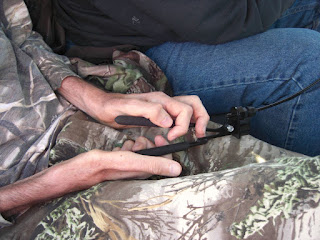 I first used the new trigger release in late August at Bang’s Paradise Valley Hunting Club in . We hunted with the usual setup: Ron rigged the scopecam and trigger release on the rifle, and put the rifle on my LM100 gun support. We watched a beanfield for four consecutive evenings, but no bucks showed.
The scopecam mounts on nearly any scope. 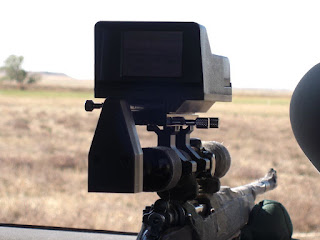 As we neared the stand on the hunt’s fifth afternoon, lodge owner Bang Collins stopped the truck about 200 yards from the blind and said, “I’m gonna walk up quietly to see if there are any deer in the field.”
Bang soon returned and said there were indeed several deer in the field. If we sneaked along the dirt road and used the woods as cover, we might get a shot. Before Ron helped me out of the truck and into my chair, I said, “The gun support’s metal arms might rattle when I’m rolling down the road and spook the deer.”
Thinking quickly, Ron grabbed a set of shooting sticks and said, “No problem. We’ll leave the bracket here and I’ll steady the rifle with these.”
It worked! The LM100 is a very helpful device which, up until then, had served me well, and I would recommend it to any wheelchair hunter who has use of his arms; however, on that day we realized our tag-team shooting technique gained speed and agility by employing a simple set of sticks. Our set-up time was greatly reduced, and the sticks let Ron change the shooting angle/direction much more quickly than he could with the bracket. The sticks also offer tremendous savings in weight and space—an important consideration when traveling.
Ron had no trouble aiming and steadying a rifle on the sticks in a position that gave us both a good view of the scopecam. We remained deadly with this setup on deer, hogs and squirrels in 2009 and 2010.

Ron steadies the rifle on shooting sticks while I hold the trigger release in my lap. We can both see the scopecam monitor. 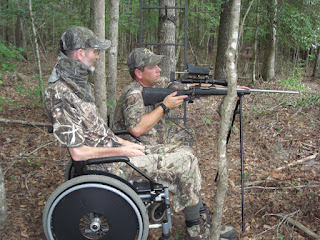 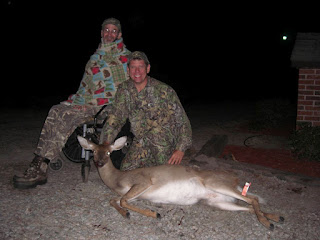