EVOLUTION OF MY SHOOTING SETUP
(PART 4 of 4)
SHOOTING OFF AT THE MOUTH
Dealing with ALS has taught me the true meaning of “adaptive shooting gear” because I’ve had to keep adapting my strategies and equipment to stay in the hunt as the disease progressively eroded my strength and mobility. 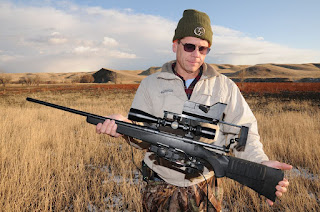 Here’s how (and why) I began using a sip-activated trigger control:

Replacing the wheelchair-mounted gun support with shooting sticks (as explained in Part 3) gave me and my point man much more speed and agility in getting on target; my increasingly atrophied hands, however, represented a weak link in the system. Our shooting sequence typically went like this: Ron (or whoever else was assisting me) would flick off the safety, put the crosshairs on the target and give me the OK. Then I’d start squeezing my manual trigger cable and the gun would fire after a 2- to 5-second delay—an agonizing eternity when you’re aiming at a live animal and trying to hold a rifle steady, even when supported by shooting sticks.
While hunting wild boar in in April 2011, I had to ask my aide, Ivson, to help me squeeze the trigger control while the guide aimed. My hands had become too weak to safely hold the plier-like handles. I had plans to hunt deer in the following November, and I knew I would need a viable solution to my trigger problem for that hunt and all others in the future.
Once again, BE-Adaptive (www.be-adaptive.com) provided the answer. I ordered a TM-100 mouth-controlled trigger mechanism and had it delivered to Andrew McKean, my host in . This device consists of a switchbox wired to a solenoid that moves a small bar to press against the trigger. The user inhales (sips) on a rubber tube to trip the switch, activate the solenoid and squeeze off a shot.
Since the TM-100 usually draws current from the 12V battery on a motorized wheelchair, I advised Brian, the creative mastermind at BE-Adaptive, that the power source for my manual chair (my aide Ivson) would loudly object if we pinned alligator clips to any of his terminals. Brian added to my order a rechargeable 12V marine battery (which approximates a redbrick in size and weight) and went to the extra effort of replacing the trigger control’s connectors so they’d fit the battery terminals.
When we arrived in , Ron, Ivson and I, along with Andrew and his friend Mark Copenhaver, checked out my new trigger control in preparation for the hunt. The TM-100 is designed to mount on a gunstock, but Ivson and I found a way to secure the switchbox’s Velcro straps to my neck brace so the rubber tube would stay in an easy-to-reach position. (I wear a rigid cervical collar because my neck is too weak to hold up my head.)
My aide Ivson adjusts the tube on the TM-100’s switchbox. 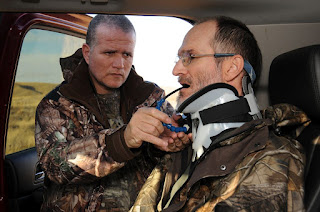 Then we realized we should lengthen the wires between the switch and the trigger bar because we need at least 4 feet of maneuvering room so my point man can comfortably aim the rifle for me. Mark offered to run to the hardware store with Ron. They returned with insulated wire, solderless connectors, heat-shrink tubing and electrician’s tape. Soon they had spliced an extension to the wire, and now my point man enjoys the freedom of a 5-foot leash.
Mounting the trigger bar on a rifle’s trigger guard. 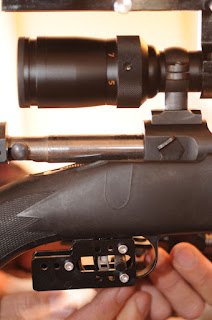 Ron rigged the TM-100 on Andrew’s Savage .270, connected the battery and asked me to test the trigger. I was surprised by how little suction is required to trip the switch. When Ron saw the immediate response—there was no delay between my sip and the trigger pull—he smiled and said, “You should have gotten one of these a long time ago!”
Then he added, “We can’t use this on a semi-auto because it would be a disaster if you got the hiccups.”
Sometimes the trigger bar gets nudged out of alignment during bumpy truck rides on the way to the blind, so I’ve learned to always test the setup by dry-firing the rifle before chambering a round to begin a hunt. So far the TM-100 has helped me take deer in and red stag in . Despite this success, you could say that ever since I began using a sip-activated trigger control, my shooting really “sucks.”
This video shows a Montana doe (which we elected not to shoot) as viewed through the scopecam so you can get an idea of what my point man and I see when aiming, then jumps to a target session in Argentina that demonstrates the team shooting technique with my guide’s Ruger .308.