SURPRISES
DOUBLING UP ON SC DEER
As explained in the post “Evolution of My Shooting Setup (Part 2),” in 2008 I bought an LM100 gun rest and BT-100 trigger control from BE Adaptive (www.be-adaptive.com), along with a Trophy Shot scopecam. My buddy Ron Wagner offered to assist me on a deer hunt that fall at our favorite lodge—Bang’s Paradise Valley Hunting Club (www.paradisevalleyhuntingclub.com) in . 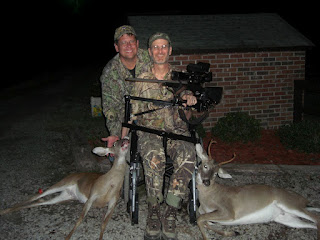 Here’s the story of our first hunt as a team:

I had the equipment delivered to the lodge and we couldn’t wait to test it when we arrived in mid-October. Ron rolled me to the on-site range to take a few practice shots with the custom .25-284 we borrowed from Bang Collins, owner of the lodge. We found the gear easy to assemble and use, and we drilled the 100-yard target. Ready to hunt!
Our big moment came the next evening. Bang took us to our stand and helped Ron with the pop-up blind. “I’ll park the truck back by the road and wait there. When you’re ready to be picked up, just call me,” he said, handing Ron a two-way radio.
Bang started to leave, and then turned with a grin to say, “You’re allowed two bucks and two does…I guess what I’m saying is, if you get a chance, stack ’em up!”
Our blind was situated on a long shooting lane bordered by planted pines. A mature doe appeared just 10 minutes after Bang left, and we decided she was a keeper. We watched for several minutes before the doe stepped into position for a clear shot.
COORDINATION AND COMMUNICATION
“I’m gonna take off the safety, so don’t squeeze the trigger,” Ron whispered.
“My hand’s off the trigger control,” I confirmed.
Eyes glued to the scopecam, I watched the crosshairs settle just behind the deer’s front leg. “Whenever you’re ready,” Ron said, and then quickly added, “No, wait! She turned away from us.”
Here’s where the ability of both hunters to see the scope monitor contributed to our teamwork. While I trusted Ron to hold the sights steady on the deer’s heart/lung area, he trusted me to wait and squeeze the trigger at the right time. The doe turned broadside again and Ron said, “OK, go ahead.”
BAM!
The .25-284 launched a 100-grain bullet at more than 3,500 fps and dropped that deer in its tracks. We congratulated and thanked each other at the same time. “Bang didn’t call to ask if we scored,” Ron said. “He must not have heard the shot.”
Ron racked the bolt and flicked on the safety because we still had nearly two hours of daylight left. Thirty minutes later a deer poked its head out of the pines on the right-hand side. “Antlers!” I blurted.
“Looks like a four-point,” Ron observed.
Ligia and I enjoy venison, so antler size didn’t matter much to me. Our second shot of the evening resulted in another instant kill. Bang immediately radioed to ask what had happened, and Ron held the radio so I could answer: “One deer on the ground!”
“Should I come in now or do ya’ll want to keep hunting?”
“We’ll hunt till dark,” Ron replied. Then he turned to me with a devilish smile and said, “He doesn’t know we got the first one. Let’s surprise him.”
Just a half hour after we had fired our second shot, another deer materialized by the downed buck. Peering through binoculars, Ron whispered, “It’s a spike. Do you want to take him?”
I’d have given the green light if it were a mature doe or trophy buck, but Ron and I agreed there was no sense in killing another young buck. We watched the deer for several minutes before it dissolved into the pines. The only other game we saw that evening was a rabbit.
Bang pulled up shortly after sunset and helped Ron put our gear—and me—in the Suburban. When Bang started down the lane we could see our buck’s white belly in the headlights; the doe had fallen with its dark back to us. Ron hopped out to load the buck on the rear rack, and upon reentering the vehicle asked, “Hey Bang, do you like surprises?”
“I guess so. What are you talking about?” Bang looked at me for a clue. I simply shrugged, trying to hide my grin.
“Just keep driving,” Ron said.
“Why, you rascals!” Bang said when he saw the doe. “I only heard one shot.”
As we told our story, Bang’s smile got bigger and bigger. It turns out that after dropping us off, he had made a quick trip to town to buy an iced tea. Our doe was already down by the time he returned and parked to wait for us. Bang was genuinely pleased with our success. He also said that while he wouldn’t have minded if we had taken the spike, he approved of our decision not to shoot.
We measured the shooting distances at 120 yards to the buck and 200 to the doe. Such spectacular results on our first hunt with my new adaptive gear gave us total confidence in our ability to use it and make clean, ethical kills.
Bang, standing behind the “surprise” doe, shares a big smile with Ron and me. 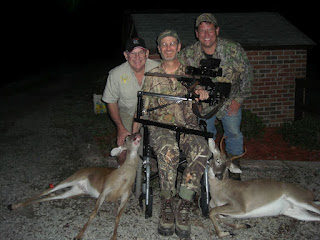 The South Carolina Low Country produces fine bucks! These two 8-points fell to hunters at Bang’s Paradise Valley Hunting Club while we were there in October 2008. 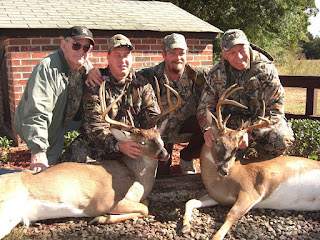