In the autumn of 2006, shortly after I was diagnosed with ALS, my wife and I embarked on a two-week whitetail safari in the Southeast. My hunts in , and went smoothly thanks to the help and generosity of people we hadn’t met before this trip.
Here’s the story of my grande finale:
Finally a Buck
“Don’t shoot the first buck you see tonight,” Ray Sedgwick advised me as he parked the truck. “The bigger ones come out later.”
This afternoon—Thursday, the last day of my whitetail safari—we weren’t at the club. Instead, I’d be hunting a small parcel that Ray leases just for himself and his son, and that meant I could take a buck. My host said he knew of at least one good 8-point visiting the bait, and he hoped I’d get a shot at it.
Ray backed the four-wheeler off the trailer, helped me onto the seat and punched the throttle. We skirted a large hayfield and entered the hardwoods on the other side, and then followed a winding trail for 150 yards to reach the stand: a box blind about 5 feet off the ground. A bunch of cardinals indicated the bait’s location at the end of a 70-yard shooting lane. Ray told me he was scattering corn there every two or three days, to the tune of about 50 pounds a week.
After getting me situated in the blind, Ray handed me the rifle and said, “I’ll pick you up after dark.” Then he pointed a finger at me and added, in mock seriousness, “Don’t go wandering off. Wait right here till I get back.”
Temperatures in the low 60s made it a pleasant evening to spend in the woods, so I relaxed and took in the show. The opening act, put on by a flock of cardinals and a supporting cast of sparrows, lasted about 30 minutes. Next a hen turkey stepped up to scratch out a solo performance for a half-hour or so.
Then I noticed a doe sneaking in from the right, just 35 yards in front of me. Entering the shooting lane, she turned and walked directly to the corn. She was safe today; her cohort, however, was not.
A buck entered stage left, antlers glinting in a shaft of golden sunlight that seemed to make him glow against the backdrop of shadowy woods. I remember noticing how sleek he looked as he stood there, broadside. (I’ve since learned that trim-bodied bucks are young’uns. This fella was probably two years old.) Not willing to gamble away this perfect opportunity in hopes that a bigger buck would appear, I ignored Ray’s advice, raised the .270 and never even glanced at the antlers.
When the rifle roared, the buck slammed to the ground and lay on his side, legs flailing. I didn’t cycle the bolt because I figured he was anchored. I watched, flabbergasted, as the deer struggled to his feet and disappeared in the woods to my right.
“You bonehead!” I chided myself. “If you had been ready, you could have shot again.”
After a brief intermission, the show—as it always must—went on. In the remaining 90 minutes of daylight, the cardinals returned, then the turkey, and then the doe. The turkey ended up walking right toward me and roosting in a tree above the blind. Just before darkness lowered the curtains, a raccoon waddled over to have some corn.
When Ray showed up I told him I had knocked one over, so he helped me onto the four-wheeler and we rode down to the corn to investigate. “Well, he couldn’t have gone very far,” Ray said, inspecting the area with a flashlight. “There’s a lot of blood and some pieces of lung tissue.”
As he followed the sign, Ray let out a soft howl like a trailing hound (“aroo aroooo”) every time he found blood. He finally returned, dragging the deer: a spindly 6-point.
“I told you not to shoot the first buck you saw!” he said. 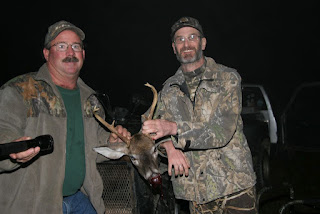 “The antlers really aren’t that important,” I said.
“This buck is a trophy to me.” 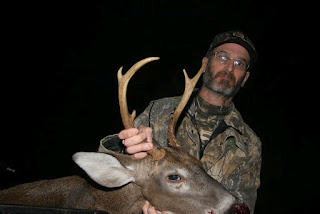