In the autumn of 2006, shortly after I was diagnosed with ALS, my wife and I embarked on a two-week whitetail safari in the Southeast. My hunts in , and went smoothly thanks to the help and generosity of people we hadn’t met before this trip.
Here’s the story of a busy morning in :

The Come-Back Doe
On the second morning of my hunt, Ray picked me up before daylight and helped me into a box blind that watched over a feeder (baiting is legal in SC). The drizzly dawn revealed another gray day.
The automatic feeder scattered a dose of corn at 7:30, and soon afterward a slender 8-point strolled into view. The young deer nibbled at the corn for 15 minutes, and then looked intently into the woods to my right. A larger 8-point with a long-tined, symmetrical rack emerged from the trees, prompting the smaller buck to walk off in the opposite direction.
Since I couldn’t shoot bucks, I sat back to enjoy the show as the big boy fed and took frequent pauses to rub his face and antlers on overhanging branches. When Ray pulled up in the Kubota at 8:30, the deer—80 yards away—stood and stared our way for several minutes. It didn’t bolt until Ray took a few steps toward the feeder.
“That’s a nice buck,” Ray said. “In a year or two it might be a shooter.”

I only understood that comment when I saw the homegrown bruisers hanging on the clubhouse wall. 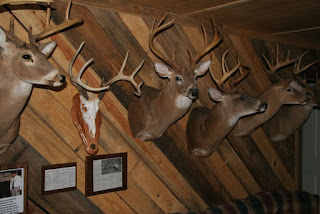 Increasing rainfall throughout the day convinced me to stay inside that afternoon, but I was ready to hunt the next morning. Ray took me to a blind that sat 8 feet off the ground in an area of mixed pines and hardwoods. He parked under the entrance and helped me up into the Kubota’s bed, which shortened my ladder climb to just four rungs.
The previous day’s rain yielded to a clear, bright dawn as I looked down a 15-foot-wide shooting lane that led to a feeder 70 yards away. At 7:30 a doe emerged from the woods on my right and slowly walked toward the feeder. As I waited for her to give me a good shot opportunity, she was joined by a smaller doe.
When the larger doe turned broadside, facing left, I was ready. My heart raced and my breathing was rapid, but I had a solid rest for the rifle, my legs weren’t shaking, and I was shooting right-handed. I held the crosshairs on the heart/lung area and squeezed. I’m sure I blinked from the recoil; in that split second, both deer simply vanished. I had no idea which way they ran and I didn’t see the doe’s reaction to the shot. I felt sure of a hit, though, because the sight picture looked good. All I could do was chamber another shell, flick on the safety and wait.
I didn’t have to wait long. A half hour later, the smaller doe returned, approaching calmly from the left. She began feeding, but offered no shot because she was facing directly away from me. Then she turned slightly to the right, head down, exposing her ribs at a steep quartering-away angle. Even though it would be a tough one, I felt confident about taking the shot as I put the crosshairs on the deer’s ribs. The doe collapsed at the shot and never moved.
Twenty minutes after that shot, a 6-point buck appeared and began feeding nonchalantly beside the dead doe. When Ray arrived at 8:45, the curious buck watched us for a moment before it finally spooked.
Ray brought some backup—fellow club members Dennis and Keith—to help assure my safe descent from the blind. “I see you got one,” Ray said.
“There’s another one out there somewhere,” I said. “I don’t know which way she ran, though.”
There was no sign of a hit where the deer had been standing, so the guys spread out to look for blood. Ray asked, “Which way was she facing when you shot?”
I pointed to the left. Ray took four steps in that direction and found a large splash of bright red blood. “Here’s where she landed after the first jump. Over this way, guys.”
Keith, Dennis and Ray disappeared in the woods as they followed the blood trail.

Soon they returned, carrying the deer. 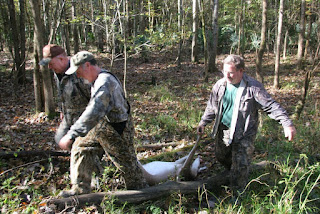 Dennis then examined the smaller doe. “She was facing away from you? The bullet came out at the base of her neck and severed the spine,” he said. “That’s good shooting for a guy who works for a fishing magazine!” 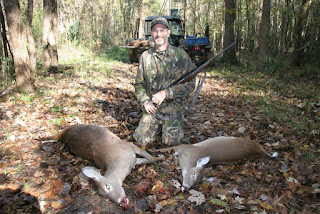