In the autumn of 2006, shortly after I was diagnosed with ALS, my wife and I embarked on a two-week whitetail safari in the Southeast. My hunts in , and went smoothly thanks to the help and generosity of people we hadn’t met before this trip.
Here’s the story of a rainy morning in :

Call me Lefty
I met Mark Davis, PR man for Shakespeare Fishing Tackle at that time, through my job at Sport Fishing magazine. During a fishing trip—oops, I mean “business function”—Mark extended an open invitation to hunt with him near his home in .
While plotting the itinerary for my Southeast whitetail safari, I contacted Mark and told him which dates I could spend in SC. “I’ll be hunting deer in that week,” he said. “But I’ll set something up for you.”
Mark put me in touch with Ray Sedgwick, a professional bass angler sponsored by Shakespeare. Ray said I was welcome to hunt with him, and he invited Ligia and me to stay as guests in one of the rental cottages at the fish camp he owns.
On the afternoon of Monday, November 6, we arrived in Cross, SC and found our way to the Canal Lakes Fish Camp, situated just off Highway 45 on the canal between Lakes Marion and Moultrie. When we entered the tackle shop to buy my hunting license, Ray’s mother greeted us from behind the counter and kindly found freezer space for the venison I had collected in and .
Ray came by later to introduce himself and make plans for my hunt. His club leases a vast tract of land that stretches from the to Highway 45; membership is limited to 25 hunters, and each is allowed to place three blinds on the property. Members adhere to a rigorous deer management program that requires commitment, effort and sacrifice. Each member may take two trophy bucks (three years of age or older) and one lesser buck per season. That means passing on a lot of fine-looking bucks.
The club hires a wildlife biologist to estimate the size of the deer herd on the property and determine how many does should be harvested to maintain the population at sustainable levels. “This year each member has to take five does,” Ray explained. “Unfortunately, I can’t let you shoot any bucks, but you can help me with my doe quota.”
Ray picked me up at 5:30 the next morning for the short drive to the club. There, he wrote our names on a sign-in sheet and put a pin in a wall map so others would know where we were hunting. Then we rode his Kubota utility vehicle (stored in a shed on the premises) along the club’s network of dirt roads to reach the blind.
The floor of the box blind sat about 5 feet off the ground. Ray steadied and helped lift me from behind as I climbed the short ladder built of 2x4 lumber. I entered the blind on my knees and gripped the sturdy frame for support while rising to my feet. Once I was safely seated on a metal folding chair, Ray handed me a rifle (his son’s Browning A-Bolt .270) and said, “I’ll be in a blind 400 yards from here. Good luck!”
He pulled the curtain over the blind’s entrance and when the putter of the Kubota’s engine faded in the distance, the sound was replaced by the soft patter of drizzling rain. Pre-dawn temperatures hovered in the high 50s.
I surveyed my surroundings as daylight began sneaking past the low cloud cover. A 30-yard-wide field of green clover extended 150 yards in front of me, bordered by mixed hardwoods on the right. To my left, a huge patch of tall weeds and thick brush sat on the other side of the dirt road. The blind consisted of a wooden frame covered by camo canvas. A 6-by-12-inch viewing window was cut at eye level in the front, and a similar hole let me look out the left side. I should say “at Ray’s eye level” because he stands 5 feet 8 inches tall while I top out at 6 feet 4. So I ignored Mom’s lectures on good posture and slouched a bit to see out the windows. A hole below and to the right of the window served as a shooting port, and I was glad to see that the blind’s frame included a thoughtfully placed 2x4 for a solid gun rest.

Can you see me now? 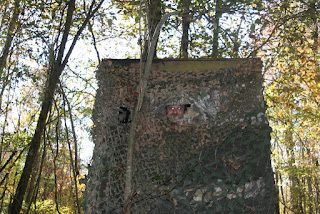 Other than a few early bird robins stalking worms in the clover, the scene remained serene for the first 45 minutes of daylight. I kept looking to my left at regular intervals because Ray had warned me that deer often travelled the edge of the weed field. After one such gander to the left, I returned my attention to the forward window and saw a deer in the clover field, right in front of me, just 30 yards out. The full-grown doe must have dropped in on a parachute because I never saw her coming. She was completely broadside to me, walking from left to right.
The rifle leaned in the blind’s front right corner, within easy reach, but I couldn’t grab it and thrust out the barrel for fear of spooking the doe. I reached over, carefully picked up the rifle and veeeery slowly pushed the muzzle out the shooting port. And I do mean slowly. It took two minutes before I could shoulder the rifle.
The doe had kept walking. She was still only 30 yards in front of the blind, but by now was 20 yards to my right. The angle was too steep for me to find her in the scope, and repositioning the chair would surely make noise and alarm her. If I wanted to take a shot, I’d have to do it left handed!
I shifted the .270 to my left shoulder and leaned forward—far forward, because the shooting rail, tailored to Ray’s dimensions, was a few inches low for me. Attaining and sustaining this extreme lean required me to contract my abdominal muscles. BIG MISTAKE!
One symptom at the onset of ALS is intense and lengthy muscle cramping. I’m talking pit-bull-vicious cramps that bite your calf and don’t let go, or screamers that seize a forearm and twist your hand into a painful claw.
Right then, my abs locked up like a bank vault. I stifled a groan and quickly leaned far back in an attempt to stretch my belly and relieve the agonizing cramp. Thirty seconds later, breathing more freely, I leaned forward—only to have my abs cramp up again. I repeated the lean-cramp-stretch routine four times. With no sign of the cramps letting up, I finally said, “This is gonna hurt that deer a lot more than it will hurt me.”
Gritting my teeth, I leaned forward and found the doe in the scope. She was facing me, head down, eating clover. Not the ideal scenario, especially when shooting opposite-handed, but I was in no position to wait for a better shot opportunity. I held the crosshairs at the junction of her neck and shoulder blades, but she lifted her head before I could shoot. I adjusted my aim to the center of her chest and squeezed the trigger.
At the shot, the deer hunched its back and ran off to my right. It bounded noisily through the woods and then crashed to the ground. After that, I heard only the gentle patter of rain on the leaves.
Ray came by at 8:30 and showed faith in my ability. He had obviously heard the shot, but instead of asking if I got one, he pulled back the curtain and asked straight off, “OK, where is she?”
“Laying in the woods, about 30 yards that way,” I said, pointing.
Ray smiled and said, “You can wait here while I go get her.”
Fifteen minutes later he dragged the doe onto the clover field. While helping me out of the blind, Ray said, “I would have found her sooner, but you said ’30 yards.’ She only went 20.”

“I didn’t want to tell you until we had a confirmed kill,” I said as Ray took my photo. “I had to shoot this doe left handed.” 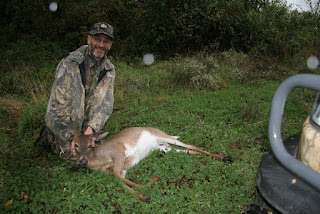 Back at the clubhouse Ray wrote the deer’s sex and weight in the club’s harvest logbook. He also cut out a section of the jawbone to send to a biologist, who determines a deer’s age by examining the teeth. “We do this with every deer we shoot here,” Ray explained. “All the info helps the biologist understand the deer herd’s overall health.” 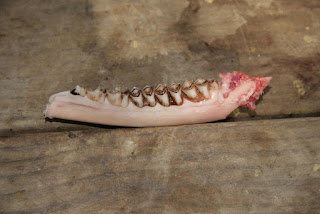 Then Ray skinned and gutted the deer, and hung it in the walk-in freezer. We found my mushroomed bullet lodged just beneath the hide on the doe’s left flank. On the way through her body, the bullet had clipped the top of the heart. I guess shooting southpaw didn’t cramp my style.
Postado por Andy Hahn às 6:27 PM