In the autumn of 2006, shortly after I was diagnosed with ALS, my wife and I embarked on a two-week whitetail safari in the Southeast. My hunts in , and went smoothly thanks to the help and generosity of people we hadn’t met before this trip.
Here’s the story of my second-chance doe in :
Luck of the Draw
On the morning of November 2, 2006, Ligia and I left and headed south to the home of Spud and Chris Woodward in . I knew Chris because we both worked on the edit staff of Sport Fishing magazine. Although we emailed back and forth nearly every day, we rarely saw each other. I had never met her husband, Spud.
We paused at the Woodwards’ house just long enough to stash our venison in their freezer, transfer luggage to Chris’ SUV and get on the road to their hunting camp. Spud followed us in his pickup.
Chris and Spud don’t get excited about deer season but they are avid turkey hunters. The hunting camp—actually a comfortable, two-story cabin surrounded by several hundred acres of overgrown pine plantation near Baxley—belongs to their friend, Glenn. When Spud asked, Glenn graciously agreed to let us use the cabin and hunt deer on his property.
Early morning view of the pond behind the cabin 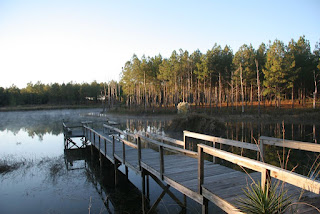 Spud had gone out to the property the week before to anchor several pop-up blinds in likely spots and give the deer time to get used to them. He took care to place them in locations accessible by pickup, so I’d only have to shuffle about 10 yards after getting out of the truck. With help from my walker, I could crouch through the blind’s door and sit on a folding stool. The walker then stayed in front of me as a gun rest. For this hunt I’d be using Chris’ Ithaca.243, powered by 95-grain Nosler handloads from Spud’s dad.
The first day I hunted over a “beanfield” at the head of a draw just a quarter-mile from the cabin. The field measured about 80 by 35 yards, but the area obviously wasn’t a bean-friendly environment. The few, widely spaced plants that managed to survive in the sandy soil were only 6 inches tall. Judging from the tracks, however, deer visited on a regular basis.
The blind sat 5 yards inside the pines on the beanfield’s east side, giving me a good view of the field and the pines on the other side. The draw sloped downhill to my right, where it grew thicker with mixed hardwoods. We hunted morning and evening, taking a midday break for lunch and a siesta. I saw nothing larger than bluejays the first day.
Spud hunted a different spot, but I could tell where his mind really was. When he came to pick me up, his first question was, “See any turkeys?”
The next morning I saw only songbirds while keeping vigil near the intersection of two deer trails in a large stand of pines. I should have stayed closer to camp—on the front porch, perhaps. Spud and I saw a deer as we drove back for lunch, and Ligia told us she had seen four deer just 50 yards from the cabin when she went for a morning walk.
I returned to the beanfield blind that afternoon. As the sun dipped out of sight and the evening began to get chilly, I noticed movement about 120 yards out front and to my right. A fox was walking through the woods, headed up the draw toward me. Wait, that’s not a fox, it’s a deer! Two deer!
The pair of does stopped at the opposite edge of the beanfield, about 60 yards away, and looked around. I shifted my position so I could shoot in that direction more comfortably. Before I could take aim, the deer stepped into the open field and started walking to my left. Within seconds, one doe was crossing in front of me, broadside at a scant 30 yards.
I flicked off the safety, moved the rifle to my left to get slightly ahead of the moving deer and… 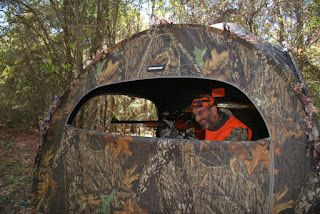 BAM!
Oh s**t!
I bumped the trigger while repositioning the .243 and sent a wild warning shot over the deer’s bow.
I cycled the bolt and kept my eye on the deer as they sprinted directly away from me. To my amazement, they stopped as soon as they reached the pines on the other side of the beanfield. One doe stood broadside at 65 yards, her hindquarters hidden by a tree. But I had a clear view of her front half, so I held the crosshairs behind the leg and squeezed. I figured the deer dropped instantly because I saw only one white flag bound away.
Spud walked up soon after my second shot. I told him the story in the gathering darkness and pointed toward the spot where I expected him to find my deer. He radioed Chris—who, back at the cabin with Ligia, had heard the shots—and asked her to bring the truck and a strong flashlight.
When the ladies arrived, Ligia and I waited by the truck while Spud and Chris went to retrieve the deer. Imagine my surprise when I saw the flashlights bobbing in expanding circles, and a 20-minute search failed to produce a body. I felt sure of a hit because the sight picture looked perfect and my walker provided a steady rest. And it had happened so quickly that I didn’t have time to get the shakes.
“I’ll come out tomorrow to look in daylight,” Spud said, and we all agreed that was the best plan. I wasn’t worried because I’ve seen heart-shot whitetails run 100 yards while dead on their feet.
I slept in while Spud took his .25-06 for an early morning walk. Chris, Ligia and I were finishing breakfast when Spud poked his head in the door and said, “I found Andy’s deer. I’m gonna take the truck and get it now.”
The ladies cheered and I said, “I knew it!”
Spud said the deer apparently ran 70 yards after I shot it. Our autopsy of the deer revealed that my bullet had hit high in the ribs and passed through without expanding much. The small, high exit wound left no blood trail. It also damaged no meat, so the quarters and backstraps were in excellent condition.

Chris and I pose with my doe. 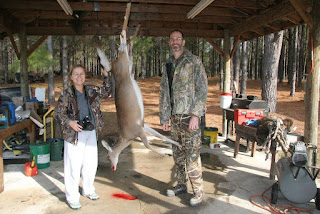 “We have fresh venison,” Ligia says with a smile. 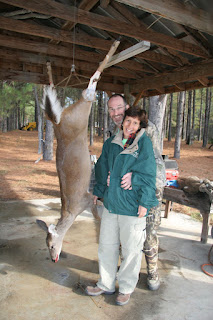 Spud begins the task of skinning the deer. 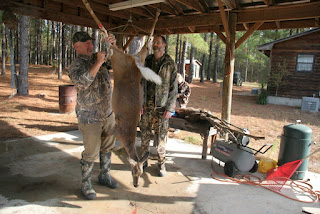