In the autumn of 2006, shortly after I was diagnosed with ALS, my wife and I embarked on a two-week whitetail safari in the Southeast. My hunts in , and went smoothly thanks to the help and generosity of people we hadn’t met before this trip. 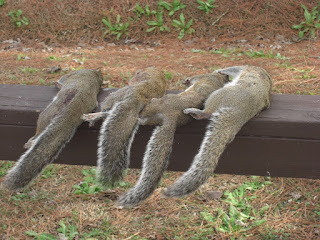 Here’s the story of my Halloween hunt near :
Spooky Squirrels
Some folks say they only hunt squirrels because it hones their stalking and shooting skills, making them better big-game hunters. I need no such excuses. I go squirrel hunting because I love to hunt squirrels.
As a teenager in I used to rush home from school, grab my single-shot 20 gauge and orange vest, and head for nearby woodlots in search of bushytails. When I was in my mid-20s, I lived in . Every Saturday in October and November I’d wake up at 3:30, drive to State Game Lands in south central and greet the dawn on a hardwood ridge overlooking the , squirrel gun in hand. My pulse always started racing at the glimpse of a tail flicking among the branches or the sound of a small critter shuffling through fallen leaves—and it still does!
While we were finalizing plans for the trip, I learned that my host, Mike Marsh, shares my passion for squirrel hunting. Although deer would be my priority, Mike also put squirrels on the hit list.
The day after I shot the two does, Ligia and I slept in and relaxed all morning while Mike (a freelance outdoor writer) worked in his home office. After lunch Mike and I drove about 30 miles to meet his friend Basil, who had “the perfect squirrel spot.”
Basil emerged from his tool shed when he heard us pull into the driveway, and we held a brief meeting to map out our strategy. We’d be hunting about a mile from the house; Mike drove the pickup along a double-rut road and Basil followed us on his four-wheeler. When we stopped, Mike helped me onto the four-wheeler behind Basil and then followed on foot while we motored 200 yards through creekbottom hardwoods.
We reached a small opening among some oak trees where Basil had set up a corn feeder to attract deer and hogs (baiting is legal in ). The corn, dosed out by the feeder in timed intervals, also draws other critters such as songbirds, raccoons and squirrels.
It took my friends several minutes to find a firm place where the legs of the plastic patio chair didn’t sink in the soft ground. I settled into the chair—wiggling around to make sure it wouldn’t shift or sink—while Basil opened my four-legged walker in front of me and draped my camo coat over it. Situated 15 yards from the feeder, this setup doubled as a gun rest and mini-blind. Mike handed me his 20 gauge Remington autoloader and a box of #6 high-brass shells, and wished me luck.
“We’ll be about 400 yards over this way,” Mike said, pointing to my right. He carried a .410, Basil toted a .22.
Today + These Woods = Not a good time and place to be a squirrel.
I relaxed, inhaled deeply and relished the earthy, leaf-loam scent of the autumn woods. My heart began beating wildly a half-hour later when I heard the sound of claws on tree bark somewhere behind me. I audibly tracked the squirrel’s progress as it scampered from branch to branch and passed overhead, taking the high road toward the feeder. I finally saw the rodent descending a tree trunk 10 yards in front of me, slightly to the left. It paused 10 feet from the ground and struck a classic squirrel pose: facing downward, body flattened against the tree, head held out.
I mustered enough strength to lift the shotgun from the walker and raise the barrel high enough to draw a bead on the squirrel’s head. The gun wasn’t rock steady, but I punched the trigger and dropped the afternoon’s first bushytail. The earthy, leaf-loam scent of autumn woods smells infinitely better when mixed with the pungent aroma of burnt gunpowder.
By nightfall I had tallied four squirrels. Then I heard a sound that told me I wasn’t the only hunter in the area. A barred owl hooted loudly from a nearby tree, and another owl answered off in the distance. They called back and forth for a few minutes, and their spooky conversation reminded me what day it was.
When Mike and Basil returned, I greeted them with “Happy Halloween!” 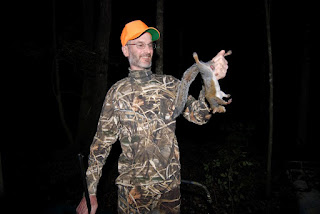